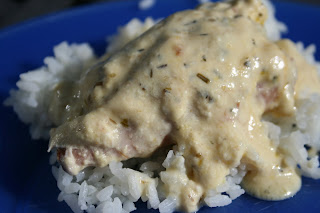 Vi, from Possession by Elana Johnson, has never tasted meat before and when Jag tells her that the delicious food is called ham, she doesn’t want him to know how clueless she is. The meat is only the beginning. Vi grew up in a world where exposing your skin to the sun is frowned upon and touching another person is forbidden. When she meets Jag, she begins to question everything that she knew to be true. Jagged Ham is inspired by a recipe my mother used to make when company would come for dinner. Simple to prepare, the meat is impressive and tastes delicious.

1 can cream of chicken soup

Cut each chicken breast in half horizontally, making 6 pieces of thin chicken. Salt and pepper the chicken and roll up lengthwise. Wrap each chicken roll with a slice of ham and place them in a crock pot that has been coated with cooking spray. Mix the sour cream and soup together and pour over the meat in the crock pot. Sprinkle the dried rosemary over the top. Allow to cook on low for 6 hours or high for 4 hours. Serve with rice or noodles.
Posted by Christy at 9:18 PM