I'm participating in Rachel McClellan's blog tour for her novel, Fractured Soul. I have not read this book, so I cannot recommend it personally. But there is plenty of information here for you to decide for yourself if you would love it. Like an excerpt:

As soon as the Vyken appeared in the doorway, I tossed a ball hard. He dodged it by jumping up along the side of the wall, his nails and bare toes somehow finding a hold in the thin cracks of the wall. I threw another one, but he was already moving, scrambling alongside the stones like a spider. He was grinning.

I rolled away from the wall until I was in the middle of the room. I lost sight of him for just a fraction of a second, but that was enough. The Vyken was gone, or, I should say, hiding. He was still here. I could feel him. I looked up toward the rafters of the tower roof. It was pitch black.
At the bottom of the tower, I heard Christian begin to ascend the stairs. “I’m coming, Llona!” he yelled.

Still staring up, I created Light again in the palm of my hand and willed it to rise. The closer it got to the rafters the faster my heart beat. Sweat rolled down the small of my back.

Light began to fill dark spaces, exposing that which wished to remain hidden. My Vyken was there, but he wasn’t alone. Another sat crouched on a beam. Where his left eye should’ve been there was an empty hole.

I screamed when my Vyken dropped from the ceiling, extinguishing the light. He fell onto my stomach, pushing my shoulders into the floor. I tried to create Light, but it was as if he knew what I was going to do because his hands slipped up and pinned my wrists together. He bent forward and inhaled my skin. The warmth of his breath steamed my ear when he said, “I’m going to eat every part of you.” 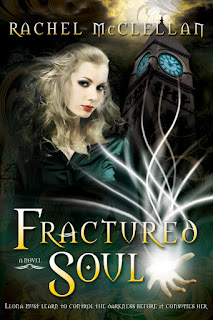 Here's what it's about:

Llona will do whatever it takes to protect her new found friends and home, but the dark plot threatening Lucent Academy, a school that’s supposed to be a safe place for Auras, may be too powerful for even Llona to defeat. This fast-paced tale of love, loyalty, and overcoming the darkness will keep you on the edge of your seat until the last page!

What others are saying:

“I love these books! A kick-butt heroine and a hottie love interest, with a refreshingly original concept. Be prepared—once you start, these are hard to put down.”
—Paula Cotton, book reviewer at ReadingLark.blogspot.com

“Fractured Soul is a brilliant sequel, exceeding even the remarkable first book in the series. It will haunt your every waking moment between the times you’re reading it, and it will stay with you long after you’ve finished. It’s an amazingly well written and engrossing story that I highly recommend—after you’ve read the first one, of course.”

Rachel McClellan was born and raised in Idaho, a place secretly known for its supernatural creatures. When she's not in her writing lair, she's partying with her husband and four crazy, yet lovable, children. Rachel's love for storytelling began as a child when the moon first possessed the night. For when the lights went out, her imagination painted a whole new world. And what a scary world it was...