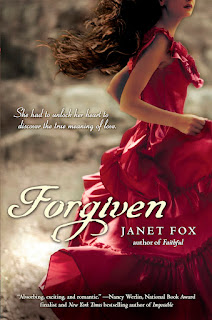 Kula Baker never expected to find herself on the streets of San Francisco, alone but for a letter of introduction. Though she has come to the city to save her father from a cruel fate, Kula soon finds herself swept up in a world of art and elegance - a world she hardly dared dream of back in Montana, where she was no more than the daughter of an outlaw. And then there is the handsome David Wong, whose smiling eyes and soft-spoken manner have an uncanny way of breaking through Kula's carefully crafted reserve. Yet when disaster strikes and the wreckage threatens all she holds dear, Kula realizes that only by unlocking her heart can she begin to carve a new future for herself.

Reading Forgiven by Janet Fox was a breath of fresh air.  Although I love fantasy, I've been saturated in it lately and this wild west story was wonderful. I love a great historical fiction, especially one like this that doesn't feel like history, more like fiction.

Forgiven is set during the great 1906 San Francisco earthquake.  I had no idea what San Francisco was like at that time and Fox gives a great feel for the city and the people.

Kula is a fascinating and complex character.  I love her determination and her ability to make a way for herself in a world where different in frowned upon.  I love that she has weaknesses and that when confronted with them, she is able to recognize and change.

The romance between her and David Wong is sweet and poignant.  Kula's relationship with Will is unpredictable.  I love how all three of them are woven together with more than just a love triangle.

The many characters are real and distinct, from Miss Everts, to Jameson, to the nefarious Wilkie (ugh, I love to hate a great bad guy).

Forgiven is part mystery, part romance, and great historical fiction, all rolled into one.