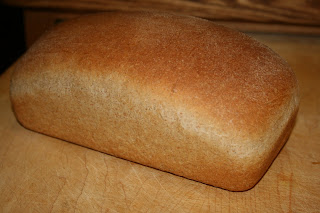 I read a quote once that said, “Good bread is the great need in poor homes, and oftentimes the best appreciated luxury in the homes of the very rich.” -‘A Book for A Cook’, The Pillsbury Co. (1905).
In The False Princess by Eilis O'Neal, Sinda's Aunt Varil, a dyer by trade, offers her bread and cheese for her first simple meal as a commoner. To me the bread symbolizes the transition Sinda makes from her old life to her new, and then on to a third alternative that she never even supposed.


I wish you could scratch and sniff the photograph! The smell of this wheat bread baking in my house was simply heaven. Many times I have attempted to make my grandmother's wheat bread and instead ended up with heavy bricks. This time I substituted half of the wheat flour with white flour and added more gluten. The result was a light and fluffy loaf of bread that still boasted great nutrition and taste! Try it for yourself.