Wings of Light by Laura Bingham 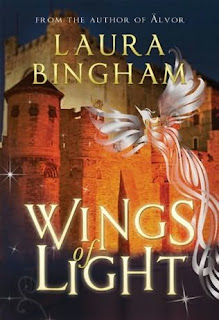 Wings of Light, the sequel to Alvor by Laura Bingham, continues the story of twins Erin and Bain as they discover their roles as immortal alva in a land they never imagined could exist. I enjoyed Alvor and I liked Wings of Light even more.  This fantastic story is aimed at middle grade, but will delight anyone who is a fan of such books as the Fablehaven series.

Food to eat while reading: Raised by Magic Quick Rolls

Bingham has a great imagination.  I never know where she will take me--the inside of a shark, flying with dragons, cooking s'mores on a Moroccan beach, or ordering take out from another continent.

The adventure and magic that I loved in Alvor is intensified as Erin and Bain learn what is required of them and search for their missing mother.  The scope of the book enlarged, the twins are now involved in the alva kingdom and what their roles will be.

Fun new characters are introduced, including Aunt Lyndera who packs everything when she travels, including the bathtub.  Old friends are back, Pulsar the dragon (awesome), Joel (who has a secret), and evil Carbonell (who's aura is lightening from darkest black).

I'm not sure that everything is as it seems.  Carbonell appears to be helpful, giving aid to the twins in the search for their mother. And Joel appears aloof and distant, sometimes putting his own interests above Erin's.  I became suspicious of Joel and found myself cringing when he took Erin's hand.  Because Joel is the (mild) love interest in the book, I can't decide if Bingham meant to distance me as a reader from Joel.  I have to say that it does make me excited to read book number three.

I still love Erin's ability to see aura's and tell if someone is lying or truthful.  It lends a deeper layer to the book and gives me pause to ponder about the real life "aura's" we project when we are truthful.

I absolutely loved the interactions with the twin's family.  It felt homey and heart-warming.

Wings of Light is the middle novel of a series so I expected there to be a crisis that would leave me hanging to hook me into the last book.  Refreshingly, things were tied up in a way that felt satisfying.  There are still plenty of unanswered questions that leave me waiting for the final book in the series.

Where I got the book:  e-book from the publisher*

*I received no other compensation for this review. All opinions are truthful and my own.
Posted by Christy at 2:32 PM