E-books and Switched by Amanda Hocking 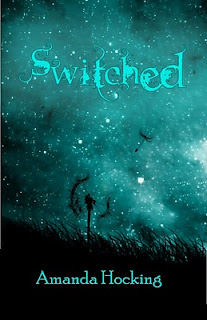 This article originally appeared in the March 22, 2011 issue of the Syracuse Islander Newspaper.

Food to eat while reading: I Hate Chocolate Cake

Switched by Amanda Hocking is a self-published young-adult novel that has garnered attention and sales since the author posted her books on Amazon.com in April of 2010.

Summary
Switched is a paranormal romance in which seventeen-year old Wendy learns that she hails from a society of trylle (trolls) who switch their children with humans at birth in order to secure a profitable future for their race. Wendy discovers that she is a princess and heir to the kingdom of these magical people. She doesn’t know who to trust: Finn, the handsome tracker assigned to bring Wendy back to her birth family, Tove, the mysterious prince of a competing nation, or Rhys, the fun-loving human who has lived his entire life in the palace. When Wendy falls in love with Finn, she despairs that they can never be together in a society where the royal bloodlines must remain pure in order for the trylle to survive.

What I think
The romance in Switched is compelling and clean. Finn is loyal and worthy of Wendy’s affections, Tove is mysterious and complicated and Rhys is fun and easy going. There is a minimal amount of swearing in the book, including one mention of the F word.

Wendy’s abilities as a trylle are intriguing, and we are led to believe that more abilities will surface in Torn and Ascend, books two and three of the series.

There were a few grammatical errors here and there but once I got into the story, I quickly forgave Hocking.  My only complaint about the story is that it is purely entertaining.  That's not a bad thing of course, unless you are like me and cherish most the books that change my view of something or hit home on an emotional topic.

Switched and Amanda Hocking’s other e-books (which are available in paperback from Amazon, Barnes and Noble, Apple and Smashwords) are well worth a handful of coins in exchange for adventure and romance.

E-books
E-book sales are on the rise. According to the Association of American Publishers, e-books grew 164.8 percent in December 2010 vs the previous year. With the recent improvements in e-reader technologies, devices like the Kindle and the iPad are making it easy and in many cases, inexpensive for readers to download books.

When Amanda Hocking struggled to find a traditional publisher for her novels, she followed the lead of other indie authors and made them available through Amazon.com. The twenty-six year old from Minnesota worked at a low income day job, filling her spare time writing toward her dream of full-time author. It didn’t take long after posting her books in April of 2010 for Amanda’s dreams to come true.

Amanda has sold over 900,000 copies of her nine books and her name is listed on the USA Today Bestseller List, right under Mockingjay by Suzanne Collins. In a matter of months Amanda has gone from barely getting by, to reaching over a million dollars in book sales.

On her blog, Amanda gives us an insight to why her books are selling. Amanda says, “From what I can guess, it happened because the books are in a popular genre, the covers are enjoyable, the price ($.99 to $2.99) is good, and the writing isn't terrible.”

With many writers self-publishing their works in an effort to jump on the train that Amanda Hocking and her peers are driving, how can you distinguish between the dross and the great read? Amanda tells us that she owes much of her success to book bloggers who publish reviews of books on sites such as Amazon and Goodreads. When you find an e-book in your browsing, do a little research of your own and find out what others are saying. You can take advantage of the new wave of technology that allows readers to buy a bestseller for the price of a soda.
Posted by Christy at 2:00 PM