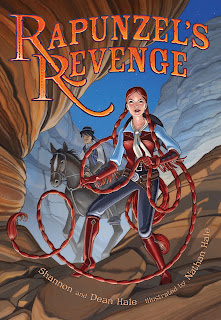 This article first appeared in the March 1, 2011 edition of the Syracuse Islander Newspaper.

Once upon a time there was a girl named Rapunzel who lived in the Wild West and used her grit and spunk to fight injustice. What? That’s not how the story goes, you say? Then you haven’t read the graphic novel, Rapunzel’s Revenge by Shannon and Dean Hale.


Like all graphic novels, Rapunzel’s Revenge uses sequential art that involves illustrations, panels and images. This evolving form of literacy is longer than traditional comic books and has a compete plotline as opposed to a cliffhanger ending. In a graphic novel the reader “reads between the panels”; they make connections between the pictures and text and the page as a whole. Graphic novels can be a tool to help children and adults succeed in the multimedia world we live in.

Young Rapunzel lives a sheltered life with Mother Gothel. When she dares climb the walls surrounding her home she learns that Mother Gothel is not her real mother, but a tyrant who controls the only water source in the land. After confronting Mother Gothel, Rapunzel is locked inside a tree in a magical garden where everything grows at an alarming rate, including her hair.

Using her ingenuity and her rope-like hair to escape, Rapunzel ignores the heroic prince and tags along with Jack (think Jack and the Beanstalk), a conspiring cowpoke who’s down on his luck (if only his goose would lay a golden egg). Rapunzel and Jack don’t lack for adventure. They tackle the wild frontier—fighting wolves, bandits and giant sea snakes while seeking freedom for those under Mother Gothel’s reign, including Rapunzel’s birth mother.

Plucky wit and raw determination make this modern Rapunzel a fitting role model for the new generation. Boys and girls will enjoy the mixture of adventure, romance and humor woven through this fairy re-tale. The sequential illustrations by Nathan Hale (no relation to the authors) make the book’s appeal broad enough to include adults and the pre-reading child.

Parents and children will delight in the detailed illustrations that are worthy of a second look (keep a close eye on the goose). One of my family’s favorite parts of the book are illustrations in which Rapunzel uses her hair to swing, lasso and even jump rope to pass her time in the tower. 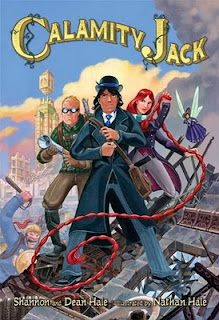 If you enjoy Rapunzel’s Revenge, you will be glad to know that a sequel graphic novel, Calamity Jack is also available. The authors plan to release a third book in the series.

Check out the authors' and illustrators websites:

For more information about graphic novels and how they can be used in schools and at home: