Shiver by Maggie Stiefvater is a delicious read, the perfect blend of fantasy and realism. The prose ebbs and flows with the emotions of the characters until it reads like carefully crafted poetry.

Maggie not only expresses herself well through the written words, but she is a musician and an artist as well. Check out the book trailer she composed and created here. 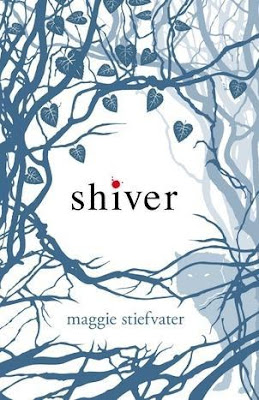 Grace spends her winters watching her backyard for the yellow-eyed wolf who rescued her from his pack when she was a child. The connection is mutual; the wolf keeps watch over her from the edge of the forest. Grace feels a strange longing to be with the wolves.

When a tragic accident occurs and a boy from Grace’s high school is killed by wolves, the town erupts in anger and threatens the pack. Grace rescues Sam and she senses a connection that is more than the similarity of his wolf-like yellow eyes. Could this boy be her beloved wolf?

Sam has little time left to spend with Grace. Winter is creeping closer and with the cold he could lose his humanity, and Grace, forever.

Suspense is high as Grace and Sam battle issues of neglect and betrayal as they race to find a cure that will keep them together. Questions loom in the background of the story. Why did Grace escape transformation when she was bitten, as a child? What will happen to Sam’s wolf family if he leaves? How can they deal with the disregard and abandon from their parents? And the largest question of them all: will they be able to find a way to stay together?

I have to say that I was taken in by the striking cover. The chilling winter milieu and cutting emotions of the story are reflected in the stark cutouts on the cover. Even the print inside the book is a frosty grey.

Shiver is the perfect contemporary fantasy. The relatability of the characters brings the fantasy into our lives and leaves us asking if the story really happened. I love that the story is told from both Grace and Sam’s point of view. The dual view gives us a full view of what is as stake and allows us to feel the depth of the characters.

Sam is a quiet book-lover, heart-breakingly vulnerable and courageous. Grace is intelligent and willing to take action. The two make a compelling and believable couple, one that I can’t wait to read more about. It is easy to fall in love with Sam and get caught up in their longing for each other.

I love that I don’t think of the creatures as werewolves, but simply as wolves. That sets this book apart from the flood of vampire and werewolf novels on the market.

The brother/sister relationship between Isabel and Jack added depth and clarity to the theme of betrayal in the novel. I was surprised by the developments that happened between the siblings and Grace & Sam.

It was hard for me to relate to Grace at first. I did not understand why she would obsess over a wolf in her backyard. Her parents were neglectful and distant, so I suppose that she found comfort in the wolf, but it took me awhile to warm up to Grace.

I would have enjoyed spending more time with the build-up of Grace and Sam’s relationship. It seemed to me that we only got to catch a glimpse of the bond they share before they were torn by external forces.

I give Shiver a five star rating because it has just the right amount of romance, woven in with truths that left me thinking about the book long after I read the last page.

Shiver is followed by Linger, book number two in the “Wolves of Mercy Falls” series and will be released on July 20, 2010. The last book in the trilogy, titled Forever, is slated for release in July 2011.

Where I got the book: Library

Food to eat while reading: Frozen Hot Chocolate
Posted by Christy at 1:27 PM