Our fast-paced society loves adventure and it loves a hero—but what about Latter-day Saint heroes? Are there any? There are plenty!

Heroes of Faith, True Stories of Faith and Courage, is a collection of twenty-four riveting stories about people who rose above difficulties and impossible odds to emerge triumphant. You’ll read about stalwart men and women who stood firm and valiant in the gospel in spite of dangerous mobs, flying bullets, physical handicaps, extreme hardships, and dictatorial regimes. It's fascinating to read about the exploits of real heroes and when that hero is acting in accordance with the principles of the gospel, the adventure is not only thrilling, but inspiring as well. In these days of increasing trials and tribulation, we can all use some worthy role models, especially those that strengthen our faith and increase our testimonies. 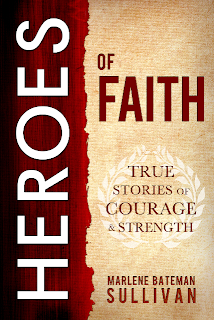 Where to buy the book:

Marlene Bateman Sullivan was born in Salt Lake City, Utah. She graduated from the University of Utah with a BA in English. She is married to Kelly R. Sullivan and they are the parents of seven children.

Her hobbies are gardening, camping, and reading. Marlene has been published extensively in magazines and newspapers and has written a number of non-fiction books, including: Latter-day Saint Heroes and Heroines, And There Were Angels Among Them, Visit’s From Beyond the Veil, By the Ministering of Angels, and Brigham’s Boys. Marlene also wrote the best-selling novel, Light on Fire Island.

A busy writer, Marlene is set to have three books published this year. Gaze Into Heaven, a fascinating collection of over 50 documented near-death experiences in early church history, was published earlier this year. Next came Motive for Murder, the first in a mystery series featuring the quirky private eye, Erica Coleman. Then, Heroes of Faith, a collection of stories about people who acted heroically in the face of grave trials and handicaps was released by Cedar Fort Inc.

About how long does it take to write a book?

My first book took me three years. But I had seven kids at home and they took most of my time. My first novel (Light on Fire Island—a mystery romance) took me about 2 years to write. If I work hard, I can do a non-fiction book in 6-9 months. I like to keep going over it, polishing and revising until I’m sure it’s as good as it’s going to get and that takes a long time!

Are you working on any more non-fiction, and, if so, what? And since you also write fiction which do you find more difficult—and why?

I just had my first novel in the Erica Coleman series published last month, Motive for Murder, and so started on another mystery. I love writing mysteries, and writing about a quirky private eye, Erica, who has OCD is a lot of fun. I am considering writing another non-fiction book, since Gaze Into Heaven, which was released earlier this year, has been so successful. Gaze Into Heaven is a collection of over 50 near-death experiences in early church history. It’s fascinating. For me, writing non-fiction is easier than writing novels. I don’t have to strain my brain the way I do with mysteries. Researching takes a lot of time, but I love that part. Since I’ve done a number of non-fiction books, I’ve settled into a comfortable routine. It’s harder to get into a routine with fiction. I’m always striving to come up with an interesting plot, figure out scenes and the characters, and all of that can be stressful. Fortunately, once I get to the revising process, writing becomes easier. I derive a great sense of satisfaction when all the editing and revising makes a polished, intriguing mystery.

What's one piece of advice you would give aspiring authors?

Never. Give. Up. People don’t fail because they can’t write, they fail because they stop trying. I have a yellowed newspaper clipping by my computer that says; “For most of us, it isn’t that we don’t have the ability to write, it’s that we don’t devote the time. You have to put in the effort.” Another way of saying that, is if you want to write and be published bad enough, you’ll work for it. And if you work at it, your writing will improve and you WILL be published.

When you were a child what did you want to be when you grew up? Did you always want to write books?

I’ve always wanted to be an author. I’ve wanted to write ever since I was in elementary, although I did not commit to it until I was in Jr. High. While attending college, I got married and that and having children set me back for years because—let’s face it—you can’t do everything at one time. To everything there is a season—But I continued writing as I could (I wrote a lot of magazine articles) and I never gave up.
Posted by Christy at 6:09 AM