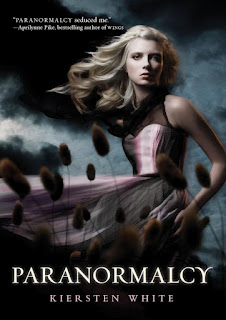 Weird as it is working for the International Paranormal Containment Agency, Evie’s always thought of herself as normal. Sure, her best friend is a mermaid, her ex-boyfriend is a faerie, she's falling for a shape-shifter, and she's the only person who can see through paranormals' glamours, but still. Normal. Only now paranormals are dying, and Evie's dreams are filled with haunting voices and mysterious prophecies. She soon realizes that there may be a link between her abilities and the sudden rash of deaths. Not only that, but she may very well be at the center of a dark faerie prophecy promising destruction to all paranormal creatures.

So much for normal.


Food to Eat While Reading: (still thinking of a recipe, probably it will have to do with fire, or souls, or fire on the inside, something spicy)

Paranormalcy felt like a fun teenish novel for the first bit and even though the writing is good, I was unsure if I would like it. Little by little, though, White reeled me in until I didn't realize that I was tangled in the plot of the book and couldn't wait to see how it ended.

Evie is a fun and quirky character, along with the other paranormals. I love her voice and the way she dialogues.

I realized, along with Evie, that just because I understand the world one way, it doesn't mean that it is the right way.  We all need to be open to changing our way of thinking and looking at things from other people's perspectives.