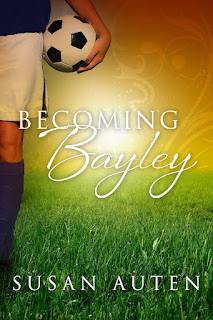 Bayley Albrecht's dream is to play soccer on BYU's South Field. When she is invited to soccer camp the summer before her senior year in high school, she just knows she's one step closer to her dream. Things get even better when she meets Matt Macauley, the star of the men's soccer team. When they decide to write each other while Matt is on his mission, Bayley figures her life can't get any better. But it certainly can get worse...

After she receives a minor concussion from playing soccer, Bayley discovers she had a disease called alopecia which causes her to lose her hair. As Bayley struggles to deal with the reality of her baldness she finds herself having to make some tough decisions. Can she still play soccer? Does she even want to? More importantly, should she tell Matt? And will he still want her when she does? Becoming Bayley is the story of one girl's journey through self-discovery, of the definition of true love, and of the realization that as a daughter of God, she is of infinite worth.

Food to Eat While Reading: Block it Banana Cake 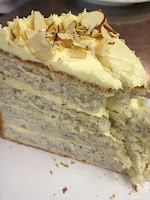 Bayley is such a real character in this book that I wouldn't be surprised to bump into her on campus. She is spunky, loveable, and perfectly flawed. Her romance with Matt is sweet and riddled with uncertainty and insecurities--just right.

My hometown is the setting for part of this book, and my little sister is a tomboyish soccer player there. It's fun for me to read about Star Valley in the book.

The romance is balanced just right with Bayley's trials with alopecia. Bayley deals with her feelings of self-worth and her changing reflection with believable human emotions.

I love the spin off thread of Bayley's brother Chase, and her friend India. It made me smile.

The book is set at Brigham Young University and her boyfriend serves an LDS mission, however, Becoming Bayley is a book for young adults of all religious faiths.

Becoming Bayley is a book for anyone who has dared to dream--and won, despite the obstacles thrown in their way.