“Deirdre had been wishing her summer weren't so dull, but taking on a centuries-old Faerie Queen isn't exactly what she had in mind.” 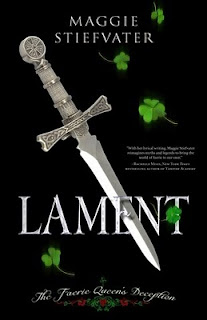 The magic of music and celtic faerie lore drew me into the book. I loved the faerie creatures and how seamlessly the author wove them into the story. Small novelties in the book were delightful, such as the clovers which kept showing up. I can just imagine the carpet of clovers covering the lawn.

The balance between suspense and answering the important questions was handled with finesse. Just when I was excited to learn something that I had been wondering about, a new question would surface and push the story forward.

I liked Luke and James. I am intrigued about the role James will play in the next book, Ballad.

Deirdre’s dad is an interesting character to me, a bit picked on, but sympathetic to his daughter’s needs. I would like to have seen more interaction between father and daughter.

I have to say that I wasn’t drawn in by the first chapter. There were so many references to Deirdre wanting to throw-up, that by the time she finally made it to the bathroom, it was a huge relief. The characters felt flat in the beginning, but I am glad that I kept reading.

The ending was abrupt and left too many loose ends-even for the first book in a series. I wanted a bit of closure with Deirdre’s aunt, and some catharsis with both James and Luke.

Readers should be aware that there is some strong language in the book, including the f-bomb. The harsh language grated on me and threw me out of the story.

I am conflicted as to what I am supposed to think of Luke. He is fiercely loyal to Dierdre, and yet has some terrific shadows tainting his past. The ending makes me wonder as to his real motives for sticking by Dierdre. I’m looking forward to exploring his conflicted character in the next book in the series.

The verdict:
An story of emotion, music and self-discovery played out on a backdrop of Irish mythology and romance.
I gave this book 3/5 stars.
Purchase: Lament: The Faerie Queen's Deception

Where I got the book: Amazon Kindle app for the iPad
Posted by Christy at 2:35 PM

Email ThisBlogThis!Share to TwitterShare to FacebookShare to Pinterest
Labels: paranormal, Review, YA