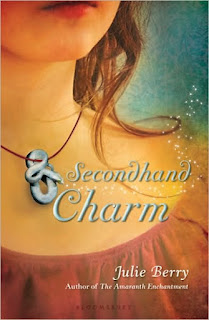 In a secluded village, magic sparkles on the edges of the forest. There, a young girl named Evie possesses unusually strong powers as a healer. A gypsy's charms—no more than trinkets when worn by others—are remarkably potent when Evie ties them around her neck. Her talents, and charms, have not escaped the notice of the shy stonemason's apprentice. But Evie wants more than a quiet village and the boy next-door. When the young king's carriage arrives one day, and his footman has fallen ill, Evie might just get her chance after all . . .

Secondhand Charm by Julie Berry is just the kind of book I like to lose myself in. Fantastic creatures,   magic, adventure, and some boy-next-door romance thrown in.

I was surprised by all of the directions that Evie kept going, and how the plot kept twisting and turning, kind of like her serpentine water dragon. I might have been tempted to complain that things were jumping around too much, but Berry did an excellent job reminding me of the character's motivations and showing me how Evie is growing throughout the book.

There are many unique and fun things about the book that drew me in. Gypsies, leviathons, charms, kings, princes, carnivals and acting groups. Such fun!

The romance was sweet enough to make me want Evie and Aidan to get together. And who can resist a boy named Aidan Moreau?

I rode along on the wave of the story, but the ending was what cinched the deal for me. It was the perfect mix of  "Oh no, all is lost--how will they ever accomplish their goals?" to "Ahh, they lived bittersweetly ever after.". Perfectly ended (and gave me great ideas on how to tie up my own work in progress-thanks Julie!).