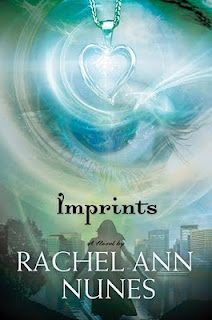 It’s been awhile since I have read any of Rachel Ann Nunes’ (pronounced noon-esh) books, and I have to say that I liked this one quite a bit. For me it was a quick read because I was so interested that I wanted to see what would happen. That I wanted to keep reading is a good thing. And the cover is beautiful.

Because the character is over thirty years old, this story bridges the gap for those of us who love to read YA paranormals, but sometimes tire of all the teen drama that goes along with them. This story is told through the eyes of Autumn Rain (cool name huh?), a single adult who has an established career and is still looking for love.

The idea of imprints-the ability to glean impressions and memories from objects is gripping, and plausible. I sometimes feel emotion when holding relics of my own, don’t you? So this ability of imprinting is quite believable for me. It opens up hundreds of story possibilities for the author and I am anxious to see what Autumn does next.

I like her friend, Jake. He’s unique (owns an herb shop, and has dreadlocks), and as a reader I want to scream out to Autumn that he loves her, can’t she see it? Also, the other romantic interests, Detective Shannon, and Ethan were interesting in their own rights and I liked them both. The banter and tension between Autumn and Detective Shannon were fun.

Autumn’s twin Tawnia brought a softness and hominess that provided a great contrast. I am fascinated by her ability to draw what is happening to those she loves.

The premise of a commune where people can live together and share each other’s burdens was fascinating. I wanted to see what the commune was truly about underneath the fascade they wore to lure others to them. The time that Autumn spent there was interesting and kept me reading.

Often suspense novels that involve disappearances can be gory or violent and the Nunes toned both of those down, much to my relief. The action and the ideas were every bit as suspenseful, and I don’t have to harbor icky scenes in my imagination.

The final scene between Autumn and Jake did not live up to my expectations. I say that tongue-in-cheek because I know that love scenes rarely do. We wait for them for the entire novel, and when it happens, we feel a sense of let down. And I realize, too, that the author may be setting the stage for future books if this is going to be a series. Still, I would have liked the scene to be longer, and with more emotion.

Though I appreciated the fact that Autumn was strict about her diet, preferring to eat things in their organic and natural state, I started getting a bit annoyed hearing about it. It was interesting at first, and it played a role later in the book, but for me it was overkill.

Imprints is a fast-paced and interesting suspense novel for adults that has a YA paranormal feel to it. Rachel, we want to read more about Autumn Rain!

*note:  When I wrote this review I was not aware that this is the second book in a series, following "Eyes of a Strange".  Kuddos to Rachel Ann Nunes for writing such a great book that it stands on its own!

Where I got the book: LDSStorymaker Conference 2010
Posted by Christy at 2:21 PM

Email ThisBlogThis!Share to TwitterShare to FacebookShare to Pinterest
Labels: Review, YA